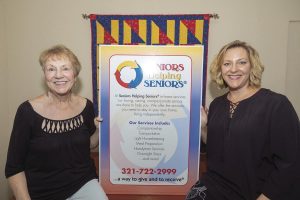 BREVARD COUNTY — Rosemary Barton has been known to break the glass ceiling and after dedicating her life to being a positive example for women everywhere, she’s ready to retire, kind of.

“I’m ready to partially retire, I’m not totally retiring,” Mrs. Barton said. “I feel that my husband and I are at a point in our lives where we’re still fortunate enough to be healthy and there are places we would like to go and travel, and I want us to have that special time together.”

Yet Mrs. Barton still plans to make time to assist in the running of Seniors Helping Seniors, a franchise she and her daughter, Jennifer Helin, co-own; just on a more flexible schedule.

“I want it to be something where I can go out and do things that I think will be helpful,” Mrs. Barton explained. “One of the things that I’d really like to do, that we don’t have enough time to do, is just to pop in to our customers to say ‘hi’ and let them know that we care about them, and we’re thinking about them.”

The mother-daughter duo started Seniors Helping Seniors, an in-home care service for seniors by seniors, six years ago in Melbourne after seeing a real need in the community.

“We had taken care of our own family, mom and I, and we saw the wisdom of having a senior go in,” Mrs. Helin said. “We saw the need for flexible care. We could be around most of the time, but there were times when we needed a little bit of help here and there, and there was nothing out there to do that.

“I happened to see an ad for the franchise and thought, ‘I wish I thought of that,’” she continued. “I checked into it and fell in love with it so much so that I thought it’s too good to be true. So, I gave it to mom because she had been in insurance for 25 years as a businesswoman, so I had her dot the ‘I’s’ and cross the ‘T’s’ and she fell in love with it too.”

Although she plans to go into a partial-retirement, Mrs. Barton said she still plans to co-own the business and give her daughter advice “whether she wants it or not.”

Mrs. Barton moved down to Melbourne Beach 20 years ago. Previous to her work as a concierge at the Windsor Club in Vero Beach, Mrs. Barton had retired from a career in Gannon Associates, Inc., an insurance agency in which she rose to become a licensed agent and retired as the company’s vice president.

During her time at Gannon Associates, Mrs. Barton went back to school in order to earn a CPCU certificate.

“I loved working in that field,” Mrs. Barton said. “I worked at an interesting time because when I started in insurance, there were no ‘insurance ladies’ it was always your ‘insurance man.’ So when I started, I was basically told that I would not be a success because I was a woman. So I had a lot of hurdles to cross to prove that I could do the job.”

But even before she was making victories by paving a way in the “man’s world” that was insurance, according to Mrs. Barton, she started out on Wall Street as a summer clerk at the age of 16. At the end of her five years working there, she was a secretary to a senior partner of the company.

“Back at that time, you could never go any further than that,” Mrs. Barton said.

During her time in high school, there were limited occupations for women to choose after finishing school, such as secretarial school, nursing, state teachers college or perhaps could work in the insurance and stock market.

“I think she is fearless in a very positive way, and she always brings people up with her,” Mrs. Helin said about her mom. “She won ‘Woman of Excellence’ a couple of years ago and that truly embodied her because she has always reached out and helped all of the women around her. She didn’t let the male-dominated world stop her.”